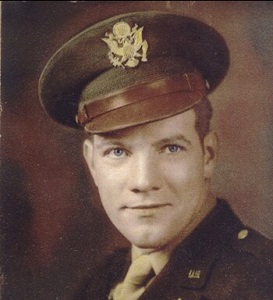 On 15 August 2015, at 7pm, a long-lost Purple Heart medal was returned to the family of 1LT James P. McAvoy at the Atlanta Braves Military Heroes Night game against the Arizona Diamondbacks. The Braves were celebrating the men and women who have served, past and present, in our nation’s military and were excited to incorporate this return into their planed ceremonies.

1st Lieutenant James P. McAvoy (SN: 0-797351) was born in 1917 in New York and later enlisted into the United States Army Air Corps in March of 1942.  He would later serve as a Bombardier for the B-17 Bomber “Bomb Boogies Revenge” (#4230805) in the 401st Bomber Squadron, 91st Bomber Group (Heavy).  On November 3, 1943, while on a Bombing mission over Belgium, 1LT McAvoy was Killed in Action. For his sacrifice, he was awarded the Purple Heart posthumously.  His other awards and decorations consist of the Air Medal, Good Conduct Medal, European-African-Middle-Eastern Campaign Medal, World War II Victory Medal, and Bombardier Crew Wings.  He is buried in the Ardennes American Cemetery in Liege, Belgium.

Almost 70 years later, 1LT McAvoy’s posthumous Purple Heart medal was discovered in a thrift shop in Maspeth, New York by a Mr. Richard Fitzpatrick. The medal was discovered at the bottom of a box containing doll house furniture.   He was able to locate the family through online posting’s they had made about their Uncle and quickly reached out to alert them.  Knowing the importance of the medal, he quickly enlisted the help of Purple Hearts Reunited to help plan a ceremony for the return.